Skunk Works: A Personal Memoir of My Years of Lockheed

We trusted our people and gave them the kind of authority that was unique in aerospace manufacturing. Above all, I didn’t second-guess them.

Use a small number of good people.

Very simple drawing and drawing release system with great flexibility for making changes must be provided in order to make schedule recovery in the face of failures.

There must be a minimum number of reports required, but important work must be recorded thoroughly.

There must be a monthly cost review… Don’t surprise the customer with sudden overruns.

Push basic inspection responsibility back to the subcontractors and vendors.

There must be absolute trust between the military project organization and the contractor with very close cooperation and liaison on a day-to-day basis. This cuts down misunderstanding and correspondence to an absolute minimum.

… ways must be provided to reward good performance by pay not based on the number of personnel supervised.

About the people, reducing waste, etc:

We were great innovators, rule benders, chance takers, and when appropriate, corner cutters.

But as we grew, the skill level decreased and sloppiness suddenly became a serious problem.

We aimed to achieve a Chevrolet’s functional reliability rather than a Mercedes’s supposed perfection.

That final 10 percent striving toward maximum perfection costs 40 percent of the total expenditure on most projects.

Going “skunky” is a very practical way to take modest risks, provided that top management is willing to surrender oversight in exchange for a truly independent operation that can make everyone look good if its technology innovations really catch on, as with stealth.

Japanese auto manufacturers discovered long ago that periodically switching suppliers and selecting new ones on the basis of lowest bidders proved a costly blunder.

We became the most successful advanced projects company in the world by hiring talented people, paying them top dollar, and motivating them into believing that they could produce a Mach 3 airplane like the Blackbird a generation or two ahead of anybody else.

We made every shop worker who designed or handled a part responsible for quality control. Any worker—not just a supervisor or a manager—could send back a part that didn’t meet his or her standards.

… atmosphere of trust and cooperation both with our government customers and between our white-collar and blue-collar employees.

… you’ll never make the grade unless you are decisive: even a timely wrong decision is better than no decision. The final thing you’ll need to know is don’t half-heartedly wound problems—kill them dead.

You’ve got the brains and personality to do the job. We’ve got a lot of talented engineers around here, but not too many natural leaders. I like the way you get along, how you deal up-front with everyone, with your good spirit and your energy.

And the open secret, which several of us inside the Skunk Works realized but never openly discussed out of loyalty to the boss, was that the blue-suiters in charge of fighters had blackballed Kelly Johnson and excluded him and us from fighter competition because they found him too contentious and bullying to work with any longer. 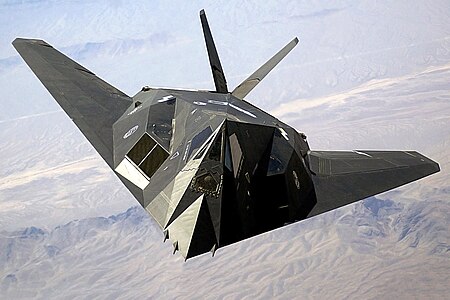 I was standing next to the radar operator in the control room. “Mr. Rich, please check on your model. It must’ve fallen off the pole,” he said. I looked. “You’re nuts,” I replied. “The model is up there.” Just then a black bird landed right on top of the Hopeless Diamond. The radar operator smiled and nodded. “Right, I’ve got it now.” I wasn’t about to tell him he was zapping a crow. His radar wasn’t picking up our model at all.

The radar cross-section was the size of a ball bearing:

So Ben went out and bought ball bearings and flew to the Pentagon and visited with the generals and rolled ball bearings across their desktops and announced, “Here’s your airplane!”

Our airplane was a triumph of computer technology. Without it, we could not even taxi straight.

“Ben, why don’t we make the stealth fighter automated from takeoff to attack and return? We can plan the entire mission on computers, transfer it onto a cassette that the pilot loads into his onboard computers, that will route him to the target and back and leave all the driving to us.” To my amazement they actually developed this automated program in only 120 days and at a cost of only $2.5 million.

The Saudis provided us with a first-class fighter base with reinforced hangars, and at night the bats would come out and feed off insects. In the mornings we’d find bat corpses littered around our airplanes inside the open hangars. Bats used a form of sonar to “see” at night, and they were crashing blindly into our low-radar-cross-section tails.

In the Gulf War:

To put it in domestic terms, if Baghdad had been Washington, that first night we knocked out their White House, their Capitol building, their Pentagon, their CIA and FBI, took out their telephone and telegraph facilities, damaged Andrews, Langley, and Bolling air bases, and punched big holes in all their key Potomac River bridges. And that was just the first night. We went back night after night over the next month. 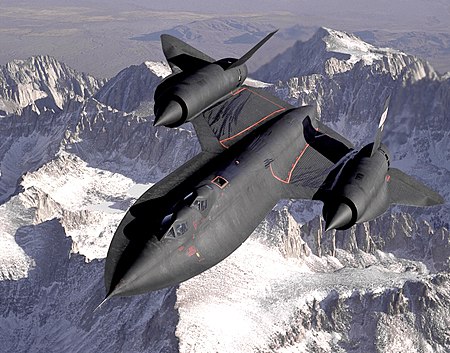 Had I really thought about it, in complexity the U-2 was to the Blackbird as a covered wagon was to an Indy 500 race car.

By the time the project ended, we had manufactured on our own thirteen million separate parts.

One day our automatic navigation system failed. Ordinarily that’s an automatic abort situation, but I decided to try to fly without the automatic navigation. I advised the FAA I was going to try this and to monitor us and let us know where we were if we got lost. I quickly learned that if we started a turn one second late, we were already off course, and if my bank angle wasn’t exact, I was off by a long shot. I started a turn just below L.A. and wound up over Mexico! I realized right then that we couldn’t navigate by the seat of our pants. Not at those incredible speeds.

We decided to cross France without clearance instead of going the roundabout way. We made it almost across, when I looked out the left window and saw a French Mirage III sitting ten feet off my left wing. He came up on our frequency and asked us for our Diplomatic Clearance Number. I had no idea what he was talking about, so I told him to stand by. I asked my backseater, who said, “Don’t worry about it. I just gave it to him.” What he had given him was “the bird” with his middle finger. I lit the afterburners and left that Mirage standing still. Two minutes later, we were crossing the Channel.

I made three low passes over the complex of hangars and buildings that comprise the famous Skunk Works operation at Burbank, and Ben had trotted out every single worker to cheer and experience the thrill of seeing this incredible machine they had built sweeping in low over their heads. There were several thousand workers down below waving at us. On the last pass I performed a short, steep afterburner climb and rocked my wings in a salute. I heard later that men had cried.

Around the time the SR-71 came roaring in over the rooftops and cracked out two massive sonic booms in salute, Nancy had stirred him awake and partially lowered the car window. The booms were as loud as thunderclaps. Kelly looked up, startled. “Kelly, do you know what that was?” I asked. “The pilot was saluting you. We all are saluting you.” He didn’t reply to my question and seemed to be nodding off. But when I looked at Kelly again he had tears in his eyes.